Carryforward Flags are designed for projects that do not upload total coverage for every commit (e.g., monorepos with multiple applications/languages, iterative/partial/delta testing setups, etc).

To benefit from Carryforward Flags, make sure you are set up with Codecov's Flag feature, to tag different sessions/builds.

In order to get the most out of carryforward flags, you will need to upload ALL coverage reports initially so that we have a baseline to carry forward.

Before discussing how to use carryforward flags, it's important to discuss how they work. That is best demonstrated with the following diagram:

The following codecov.yml is also supplied for the above example:

This upload command specifies both the path to the coverage file for files under the ui flag and the appropriate flag name (ui in this case). Once uploaded, coverage was calculated to the ui_1.py and ui_2.py files in the same manner as any report upload.

Since no report is uploaded for the unit flag, which has a setting of carryforward: true , Codecov reaches back to Commit 0 to carry forward the coverage for all files covered by the unit flag. As a result, those files have coverage information for Commit 1 that is equivalent to Commit 0.

A Carryforward Flag without a specific path?

You can use a regular expression as the "path", as in the example below.

This would be most common in a set of Integration or End-to-End tests run across the entire repo, but not run on every commit.

If, for example, you have a set of integration tests that test the full repository, but only run on specific commits or pull requests, you can do something like the following as the paths: setting

Carryforward Flags in the Codecov UI

Once your team starts using carryforward flags they will appear in the UI just like normal flags, with the addition of distinctive iconography to set them apart from Codecov's standard flags. For example, carryforward flags can be toggled when viewing source: 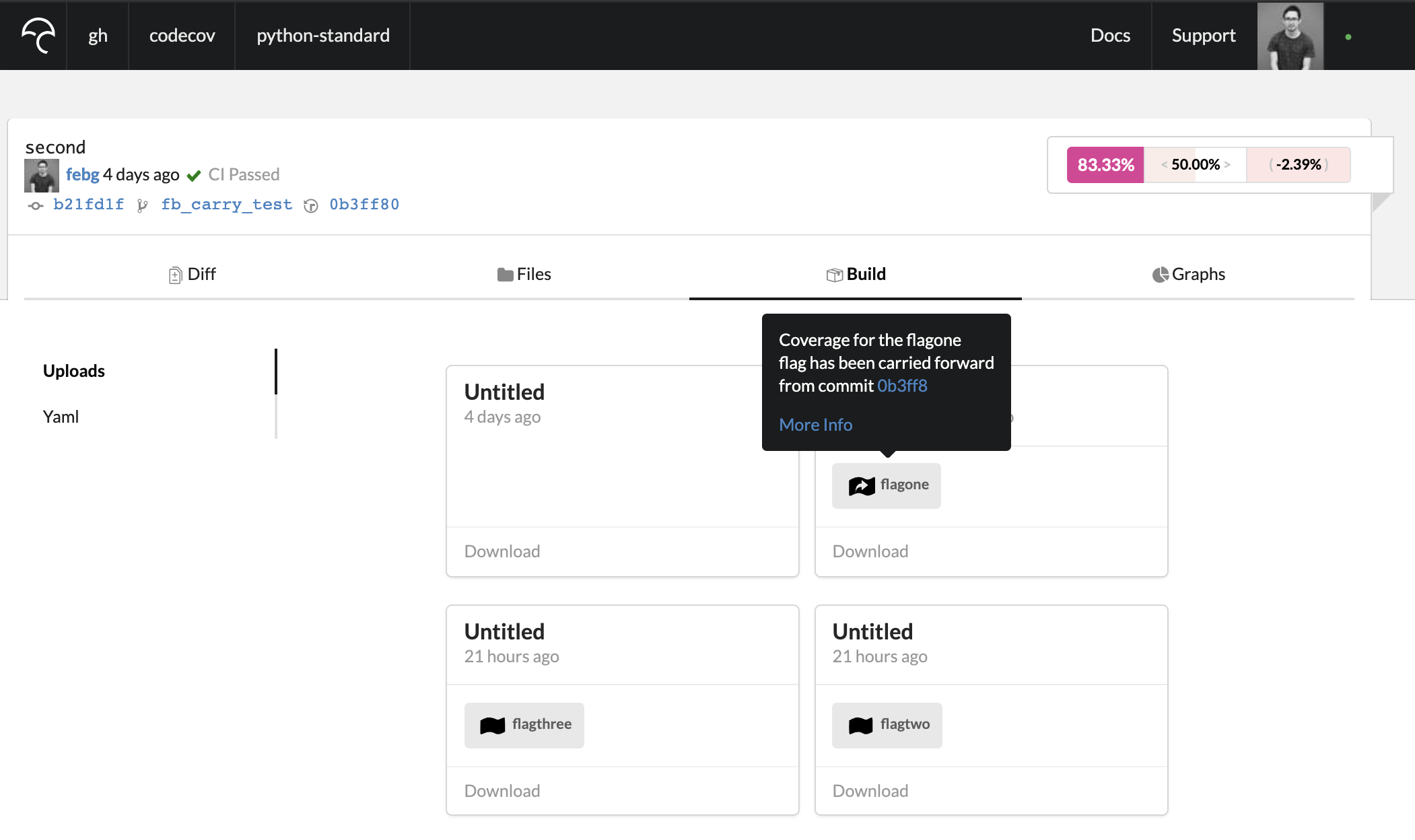 By default, any flags that are carried forward will not show up in the pull request / merge request in your code host (Github, Gitlab, or Bitbucket) in the status checks and/or the pull request comments.

Instead, only flags that have coverage uploaded on the most recent commit will show in the PR Comments.

By default flags that are carried forward will not appear in the Pull Request Comment.

If you would like Carryforward Flags to appear in PR comments, use the following YAML configuration under show_carryforward_flags.

The possible settings for:show_carryforward_flags are:

Did this page help you?