Flags allow you to isolate and categorize coverage reports for different tests and features in your project. This is particularly helpful if:

To see the "flags" feature in action, you can also take a look at this video tutorial: https://about.codecov.io/product/feature/flags/

As a minimal example, consider a project called Monorepo X that has the following folder structure:

We'll refer back to this Monorepo X example throughout the document.

To apply a flag you must submit coverage reports with the -F flagname included in the upload command. (Note: remember, Codecov always recommends the Uploader in your CI)

It is important to note that for flagging to work, separate coverage reports must be uploaded and flagged per project in the mono repo. For example, in a CI run for the Monorepo X project example, assume that coverage for moduleA is written to

Then that report would be uploaded as follows:

Now, your flag level coverage is being uploaded to Codecov.

One-to-One Relationship of Flags to Uploads

Specifying multiple flags for a single report upload can result in erroneous coverage unless the contents of that report fully encompass each flag.

For example, one report that contains coverage information for moduleA and moduleB, can be uploaded in a manner that is valid but technically incorrect:

Flags Must consist only of alphanumeric characters, '_', '-', or '.' and not exceed 45 characters

Once the uploader step is done (above), Flag-level coverage is being sent to Codecov, but, to unlock the full feature set of Codecov, you'll additionally to add Flag Management to your repository-level YAML.

Here are just a few features unlocked by adding Flag definitions to your YAML. 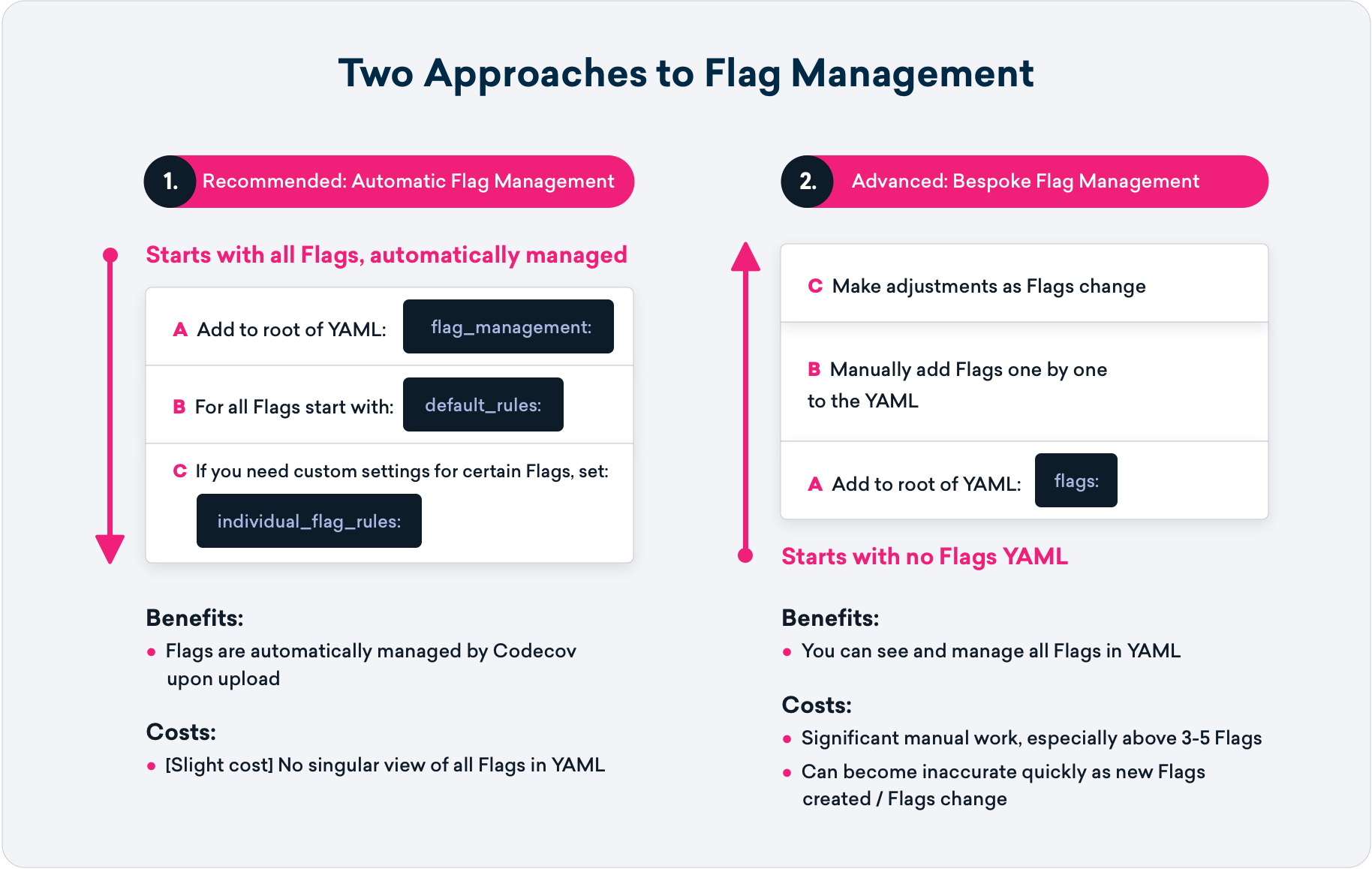 Codecov's recommended approach to Flags is based on YAML settings under flag_management:

A. Relies on a set of default_rules: to automatically ingest uploaded flags, and manage Flags in an ongoing manner

B. If you have flags that don't fit the default_rules:, Universal Flag Settings allows for customization for any flags using individual_flags_rules:

Here is an example of default_rules: in the YAML

Changing your YAML? A reminder to always validate before you deploy https://api.codecov.io/validate

If you are going to use Bespoke Flag Management, you must add every flag individually to your YAML, which can be quite manual.

To generate a flag and individual coverage gates per project in the mono repo the codecov.yml can be structured as follows:

This yaml configuration will fail a Pull Request if...

Apply the -c argument to clear the workspace of all coverage reports before running you next set of tests.

The 'Flags' tab of your main repo navigation bar will allow you to visualize your historical flags data. This feature allows you to not just label portions of your code base, but use that labeling to track how that coverage is improving over time.

When you first click the tab you will need to "Enable Flag Analytics," this lets us know you'd like us to backfill your historical data. This process can sometimes take awhile, depending on the number of flags you have and how often you make a commit.

Once flag data has been backfilled you will be able to sort by flag name and filter to the date range of data you'd like to view. Forthcoming will be an ability to both search for and select only certain flags to view as well as other functionality to make this an easy to reference dashboard for your flag coverage. If you have feedback on this new feature, please let us know we'd love to hear what you think on this Github issue.

If you do not test all of your repo code on each commit, Codecov uses a feature called Carryforward Flags to help only update coverage on tests that were run. Carryforward Flags is built on top of basic Flags. We use (and need) a full upload of all flags when carry forward is being used to initially set the coverage.

It is highly recommended to read the full documentation on carryforward flags before using them in your project.

Carryforward Flags are used by appending your YAML with carryforward: true:

Flags can be used to create custom notifications to your repository provider. This makes it easy to see per-flag coverage information alongside pull requests.

You can specify Flags in your Codecov Yaml for statuses and all notifications. Note that a flag must be specifically stated in the status: section of the YAML to have a custom notification associated.

Codecov provides a strategy to isolate specific builds from the master report while maintaining the report's integrity. When reports are not joined into the master report, they will be ignored for comparison, although they will remain accessible for source overlay, API, badges, and graphing.

Now that we have configured the flag nightly to not join into the master report, let's upload a report flagged as nightly.

By adding -F nightly we mark all the coverage report data for this build as nightly coverage data.